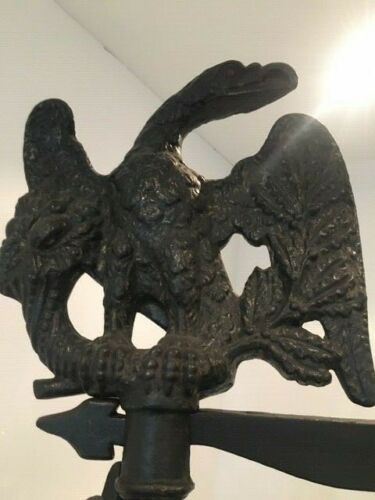 The Columbian iron hand press was invented in 1813 by George Clymer of Philadelphia. The design is inspired by earlier presses, particularly the Stanhope press.  A system of levers increases the press power without causing undue physical strain to the operator.  Clymer’s design was one of the first to completely eliminate the traditional “wine screw” design.  The Columbian press was also the most extravagantly decorated iron hand press.  In addition to the American eagle counterweight, the original decor includes the caduceus of Hermes on the staple pillars and heraldic dolphins on the main and counterweight levers.

Our press was made by Thomas Long & Co, engineers and printing press makers in Edinburgh.  The platen size is approximately 24″ by 36″, or Double Demy paper size. This is the 3rd largest standard size of Columbian presses. The larger standard sizes were the 25″ by 40″ Double Royal and the 27″ by 42″  Extra Size.  In the other end of the size range was the 7″ by 10″ Quarto.  Most manufacturers dropped the smaller sizes around the turn of the century.

There is no date or serial number on the press, but the company name and some features on the press may help dating it.  Thomas Long started doing business in Edinburgh in 1842, first as an engraver and later as an engineer and press maker. His company was trading as Thomas Long & Co from 1858 until 1882.  Several changes and improvements were made by Long during his manufacture of Columbian presses, and our press has several of these changes. This identifies the press as a later model but not one of the last ones built.

Our press has a front strengthening bar for the staple, removable guides for the main lever, and oil cups on the top ends of  the connecting links. The ornamentation of the staple is also modified from Clymer’s original design. Other, mainly visual, changes are not implemented: Removal of the dolphin decor from the main lever, change from a cylinder to a ball base for the eagle, and change of the lever return counterweight from the standard Hope & Anchor design to a male head.

Brief history of the Columbian

The Columbian press was not very successful in America, and in 1817 Clymer moved to London and introduced the press to the European market. Clymer’s business partner continued to advertise the press for a few years after Clymer departed for Europe, but very few presses were manufactured in America and it appears that none of them still exist. After arriving in London, Clymer quickly secured a patent for his press and started manufacturing in 1818.  Clymer also allowed other UK and European companies to manufacture the press under license.

When the patent expired, even more press manufacturers started making Columbian presses.  Most manufacturers adopted the design virtually unchanged, and only minor changes and improvements were made over the around 100 years the press was made.  The largest changes were made by makers in continental Europe.  Some manufacturers mounted the press on a wooden base similar to the ones used for the Stanhope press, some changed the shape of the counterweight, and some modified the ornamentation.

Despite the slow sales in America, the Columbian became one of the first successful mass-produced iron hand presses, along with the Albion and Washington presses.  We have two Albion-style presses in our collection, a Belgian one and a British one.